If you dwell upon planet earth in the 21st century, you have heard of this not so huge deal called World War 2. This is the subject of Christopher Nolan’s latest cinematic masterpiece. It focuses on the Dunkirk evacuation(I didn’t know about it until the movie either)  and truly was an emotionally and visually splendid experience and yes, it’s that also known as that movie with Harry Styles in it.

For this completely unbiased review, I am consulting Harry’s supposed wife for her thoughts on the matter.

Give us three adjectives to describe the movie:

Reason to watch the movie apart from Harry?

Nasrin: Besides the incredibly good-looking cast, it shows you a side of soldiers than you don’t get to see and it depicts the struggles of getting back home, as well as different type of soldiers

Faatimah: As a history enthusiast, it was great to feel engaged with the story and the era At times it felt like you were a soldier or a pilot, and it further enabled the emotional impact. OH, and cute pasty British boys.

Comments on visuals and the score:

Nasrin: The cinematography was brilliant, it had air, sea, and land. It had the clicking timer which added to the emotional build ups. visuals made you feel like you were there.

Faatimah: The story was nonlinear and you had to take visual cues to piece the story together, which helped because war films can seem monotonous at times and the gloomy aesthetics helped capture the dreary and miserable atmosphere, almost devoid of hope. The score made every scene that much more captivating and poignant, and gun shots sent tingles up your spine.

Nasrin: Tommy (Fionn Whitehead), obviously I love Harry but his character was a dick 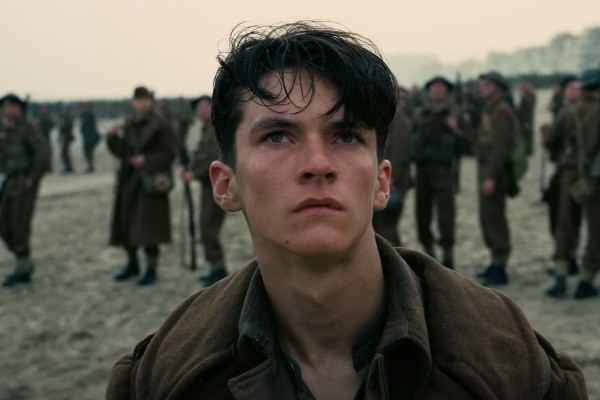 Faatimah: The fighter pilot played by Tom Hardy, who was the REAL UNDERRATED HERO.

What made the movie stand apart from other war films?

Nasrin: The film focused more on the youths that were forced into war. Other war films are boring and lackluster and focus on the romanticism of women staying home and waiting for their husbands and loved ones.

Faatimah: By featuring an ensemble cast, it offered new and fresh perspectives. Granted, they were all white males, however, it allowed us to empathize with more than just the soldiers, but those men left behind, who felt their need to fight.  It wasn’t unnecessarily crude or graphic either, you can only stomach so many mangled bodies.

On a scale of 1-5 one direction members, how would you rate the movie?

Nasrin: 4/5- because if I rated it with Zayn that would mean it sucks.

In all honesty, despite my reluctance when it came to Harry’s acting prowess and my general aversion to pure action movies, I thoroughly enjoyed the film. It might go down as one of the most surreal World War 2 movies I’ve seen this far, and it doesn’t hurt that it is factually accurate too. It’s no drawn out romance or sob fest, but rather a study of new perspectives and the human condition at the time, although it can at times seem plotless. My all time favourite movie with war as a major theme still goes to Testament of Youth, I highly recommend it.  Also, Dunkirk is best enjoyed in IMAX.

SPOILER ALERT: HARRY HAS MORE THAN 10 MINUTES OF SCREENTIME.