Sleep deprived, hyper and most ardently seeking coffee is the person you have before you typing this post. I couldn’t have planned it better if I tried , soon you might just find me stress tap dancing in my kitchen.

As one can tell by the rather blatant title, yours truly is just hot off the heels of binging the ever so sought after Gilmore Girls revival and well THINGS NEED TO BE DISCUSSED.

Letting myself dive into the lives of our favourite Star’s Hollow dwellers felt like inviting and old friend back into my life, gathering around a crackling fire on a chilly night and chowing down on a thick based cheesey pizza. It felt like home. 6 hours later and a mild lost cat scare and here we are.

The twinkling lights draping the city were enough to enamour me, but with most things there are often the good and the bad and for me this year revivals have not fared well after travesty that was The Cursed Child(although redeemed by Fantastic Beasts and where to find them).

Let’s get the bad out the way then:

Are we doomed to see Rory as a cheater ever since the end of season 2 Jess kiss or the season 6 Jess kiss ? (not the ever so present factor being Jess). The whole relationship while being compassionate and cute at times, just did not feel right at all, not to mention they were both in committed relationships, the engagement being bigger than pitiful and dimwitted Paul (should I say pete??). I am not entirely sure why I expected more from Rory, but I guess it doesn’t get more lost and downtrodden than being a geisha. By fall, I was rooting for them but their artsy and enchanting goodbye didn’t feel like their ending. ALSO THE PREGNANCY AND HIM BEING THE LIKELY DAD? I am sort of unsettled by it all and really hungry right now, so it could be a combination of both.

This one is just a personal and petty reason. Jess was likely one of my favourite characters and watching Milo bring back the same youthful zest made me feel that spark again, but he was downplayed and not given enough screen time and as a Jess/Rory shipper it was deeply unsatisfying, I will however keep playing the yearning look into the window scene on repeat and let myself dream and appreciate that Jess is truly the only person who can guide Rory when she is most lost.

As a fan of the show, I very much understand that almost 70% of the 153 episodes revolved and thrived on weird subplot, but the lengthy town musical scenes were just boring me as opposed to enthralling me.The next turn came in the form of Rory’s wild and beautiful night out with the gang from Yale and yes while enchanting, it felt like an excuse to watch rich white people, do rich white people things(not that I did not enjoy the dashing Finn’s triumphant return). Lastly, the many cameos from previous co-stars felt a bit forced in some ways. 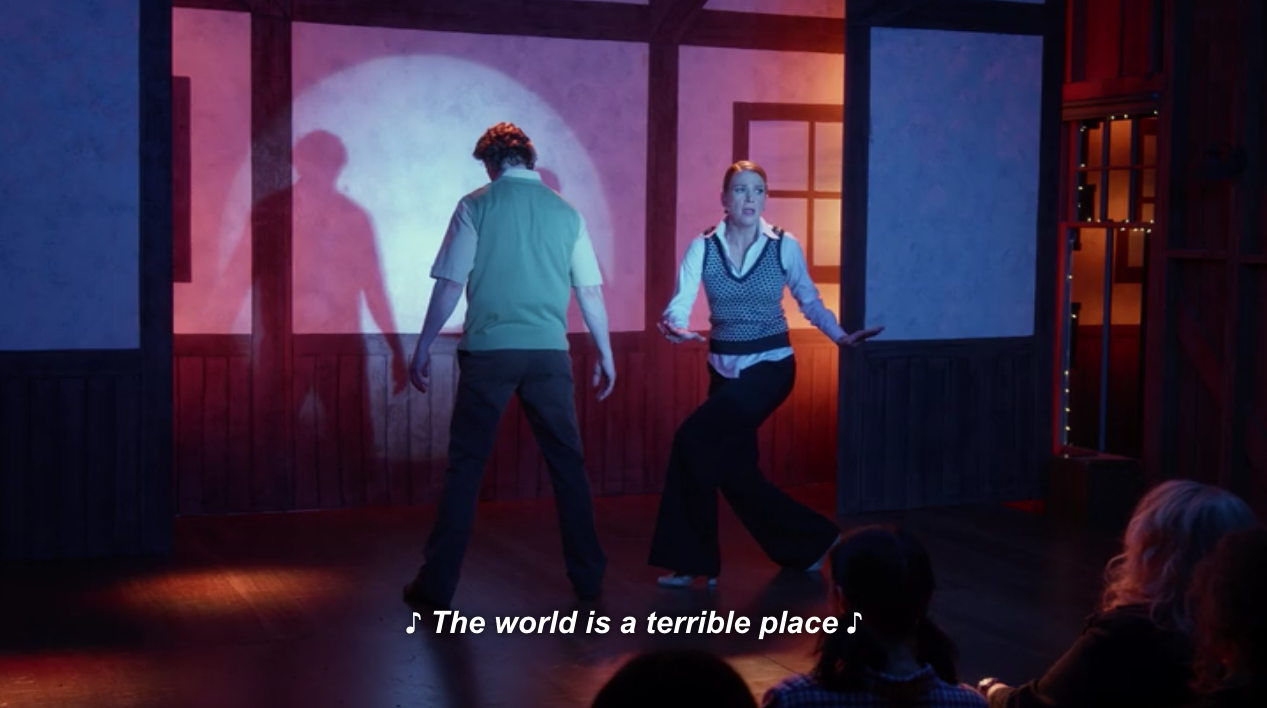 Stars Hollow is famous for many things but racial diversity doesn’t seem to be one them and you would think maybe ten years or so later that would have changed, but on screen I may have seen about 3 PoC in a sea of caucasity.

On to the good stuff

REFERENCES I COULD ACTUALLY UNDERSTAND

Seeing as I was a measly two years old when the show premiered, many of the famous and witty pop culture references went straight over my head. It felt good to see them blurt out things like Khaleesi and Doctor Who and I finally felt apart of their verbal sparring.

Forget every complex character you have ever known in books and television and just appreciate the creation that is Emily Gilmore. At times you want to maul her and others she has you in stitches. For me it really felt like she came full circle with journey after Richard’s death and it felt ever so fulfilling to watch her call the DAR out on their bullshit and invite an entire family to live with her. SHE FINALLY KEPT A MAID.

A show centered around relationships is bound to thrust you into the feels every now and then and the four part mini-series is no exception. Every fight had, tear shed or I love you said had me straight back into my emotional centre; heart warmed and infuriated all the same. WE ALSO NEEDED THAT WEDDING, WE WAITED 16 YEARS THANK YOU VERY MUCH.

My dearest quirky Kirk, so wonderfully portrayed had me giggling anytime he was on screen, when it was his failed “ooo-ber” venture or simply curating the most beautiful glitter wedding, he did not disappoint.

Fall did end on a very open ended cliffhanger, leaving potential for a next season but I did gain a certain degree of closure.Paris and Doyle’s relationship while having disintegrated felt realistic(as opposed to Lane and Zach caught up in domestic bliss) and I was so thrilled to see fierce Paris be a mother and climb the many staircases in her life. The Dean Scene felt so gratifying considering how shoddily his character was treated in later seasons. He was an upstanding and thriving  family man like we always knew he would be and there was a mutual understanding with him and Rory on the  subject of first loves. Lastly, Rory writing her book based on their lives(nudged and prompted by the lovely Jess of course) genuinely excited me and made sense for her journey of self discovery, I do however wonder how the pregnancy will fit in and am weary of the Lorelei/Rory life parallels. As as writer,  I respect Amy and Dan as well as admire them for their contribution to television and their unique formats. It has been a true sight to behold all these years and so I must also respect that they decide where our characters and story leads and be thankful for being allowed to share in the magical and whimsical world of Stars Hollow yet again.

For now, I am probably going to read some much needed fanfiction and fan theories, I shall leave you with this